Norway is a long country with different types of terrain features. The southeast area of Norway has a lot of forests and hills. The west has fjords, mountains, and glaciers; the middle of Norway has many glaciers, and the north has fjords, mountains, and glaciers also. The Scandinavian Mountain range stretches from the south to the north which has led to the formation of many valleys throughout the country. 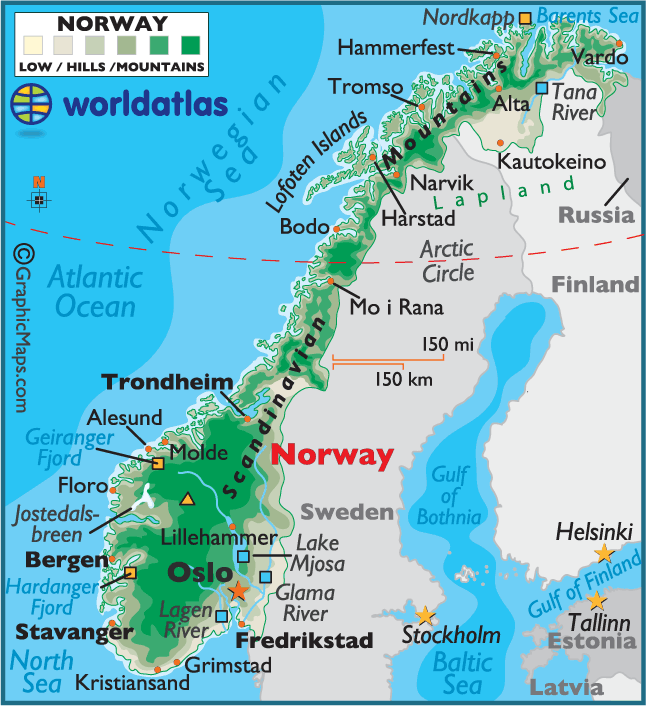 The weather can vary a lot depending on what part of the country you are in. Due to the mild temperatures of the Gulf Stream waters, the coastal areas of Norway tend to have a milder climate than other areas that are at the same latitude, such as Alaska. Further inland and up north is where the coldest temperatures (and snow) are found during the winter months. The summers inland tend to be dry and hot.

Summertime (June - August) brings warm (but not too hot) temperatures. In some places, the sun does not even set; this phenomenon is referred to as the midnight sun. It can be seen in places around (and above) the Arctic Circle. In Svalbard, the midnight sun lasts from 20 April to 22 August. The Oslo area receives quite a bit of rainfall during the year but August is the wettest month for the area. On average, the high temperatures in Norway, during summer, are between high 60s to low 70s F (20 to 22C). The peak tourist time for Norway is June - July. 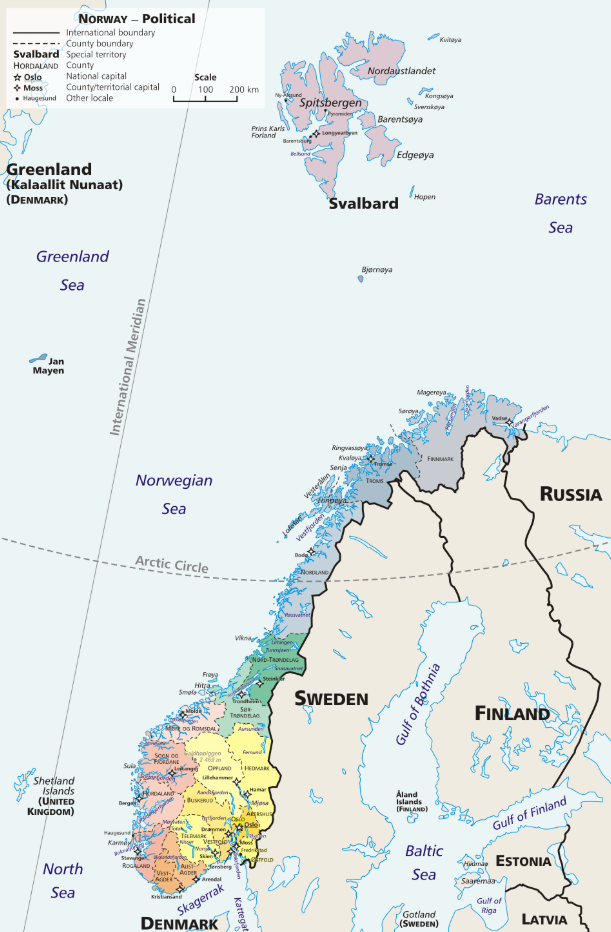 Autumn (September - November) typically brings with it rain (and in some places snow in November). Trees begin to change colors, creating a beautiful patchwork of reds, oranges, and yellows. This is a great time to go hiking, if one isn’t fond of the summer heat. October is one of the cheapest months to visit Norway, because it isn’t quite ski season yet, however many of the summer attractions are closed.

Winter (December - February) is the time for cold weather (frequently below freezing) and snow…​and lots of it, depending on where in Norway one lives (or visits). This is a great time for those who enjoy skiing. If you do like to ski, just be sure to follow the Norwegian mountain code (fjellvettreglene), which consists of 9 rules, including paying attention to weather and avalanche warnings; be prepared for bad weather; choose safe routes, etc. During the winter, the days are short and the nights are long. Areas north of the Arctic Circle may not see the sun for weeks or even months. This is also a great time to see the Northern Lights (nordlys), particularly in areas north of the Arctic Circle, around the coasts of Tromsø. If one is not fond of cold weather, the Oslo area has some of the warmest temperatures during the winter months. **If the lesson was beneficial, please consider buying me a virtual coffee. Thanks.**

Exercise: Write a brief weather forecast for your local area.