Many Norwegians tend to love the Christmas season. In fact, they kick off the season in November actually, with Christmas markets. There are many Christmas markets that pop up all around Norway. At these markets, one can purchase all kinds of crafts, toys, and other goodies. Just be forewarned that the items at the markets are not cheap. One popular “market” is Pepperkakebyen in Bergen, where one can find the world’s largest gingerbread town. (Pepperkakebyen isn’t technically a market, but was listed among other markets).

On 13 December, many schools and kindergartens celebrate Luciadag (Saint Lucy’s Day). Saint Lucy was the Catholic Saint of Light. In Catholicism, she is believed to have brought food and aid to Christians that had been in hiding, and that she wore a wreath with candles on her head, in order to light the way, keeping her hands free to carry the food and supplies.

On Luciadag, young children sing as they parade through the schools, nursing homes, and hospitals, wearing white clothes, simple head wreaths, and holding candles. The girl at the front wears a white dress, and a head wreath with candles on it. It is common for people to eat lussekatter, which are saffron buns, for Luciadag. 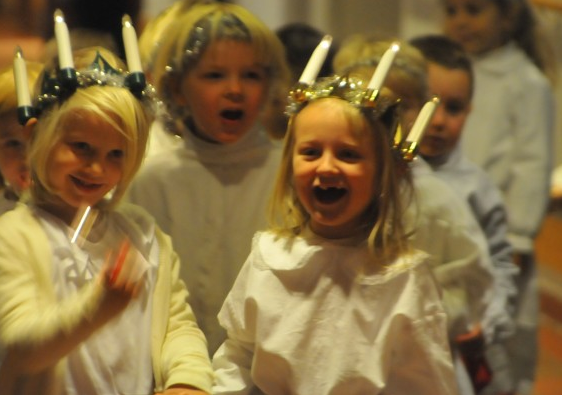 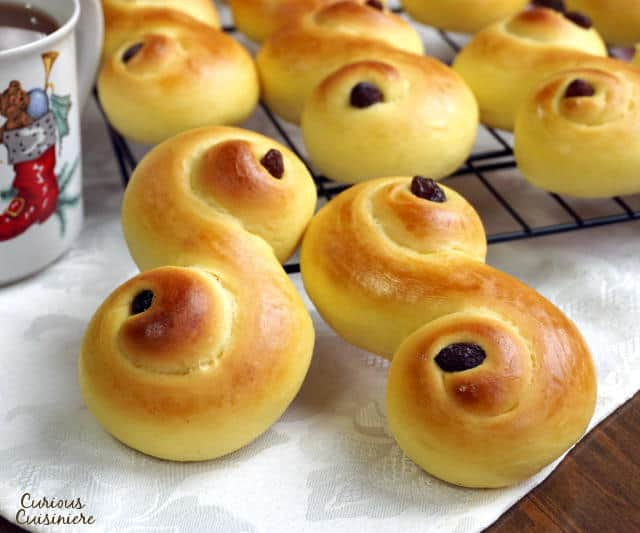 Julebord translates into “Christmas table.” A julebord is a gathering of people, usually with coworkers, where lots of food is consumed and alcohol is usually imbibed. Some of the foods commonly served at a julebord include ribbe (pork ribs) with boiled potatoes; pinnekjøtt (lamb ribs); or fish (depending on where one lives).

Many Norwegians keep Christmas decorations simple, with such things as candles, wreaths, angels, hearts, star lights, etc. Homemade decorations are common. The colors used often are purple (during advent), white, silver, gold, and red. Many have some sort of advent countdown to Christmas, such as the adventsstake, which has 4 candles for each Sunday of advent. 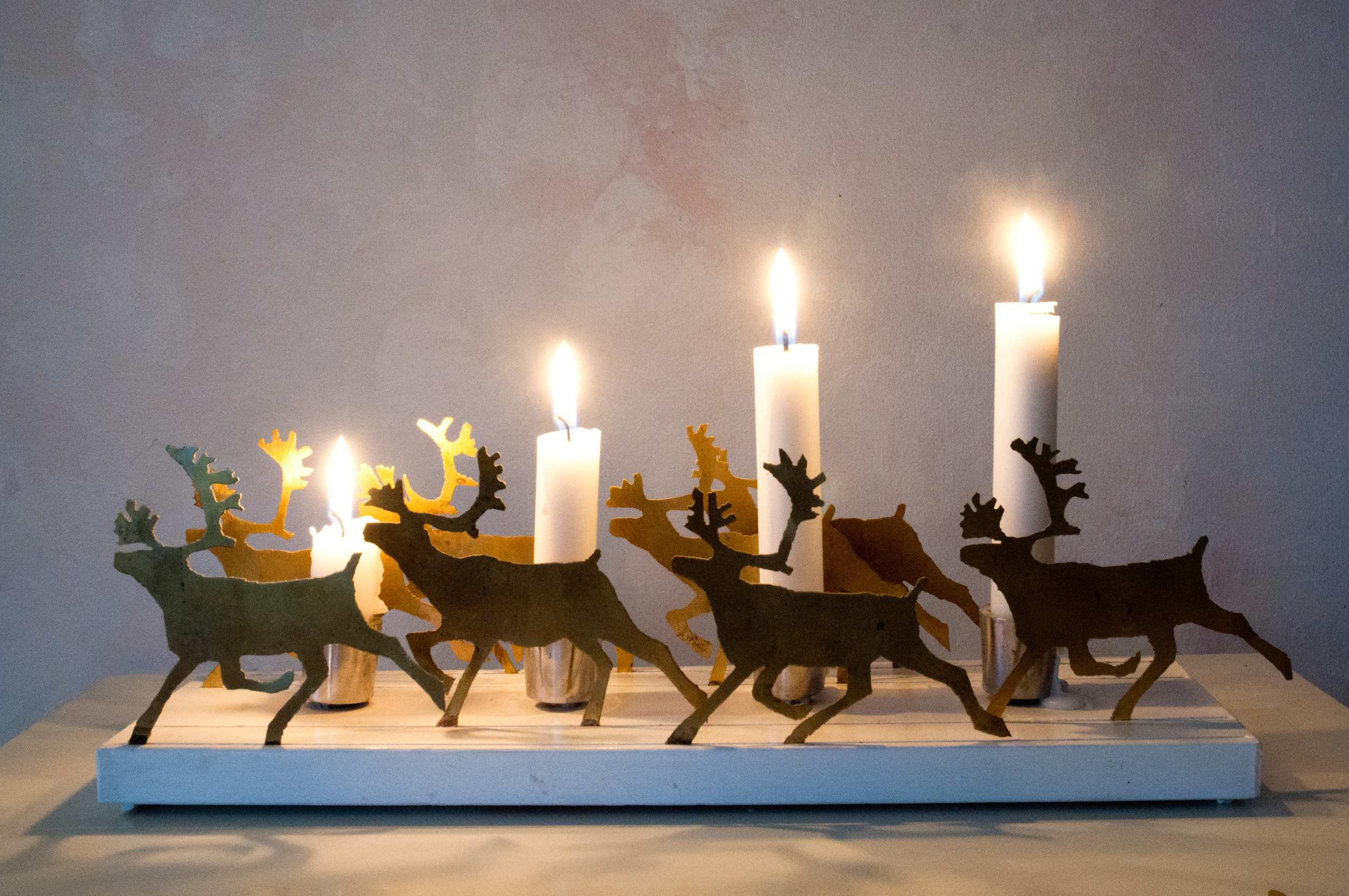 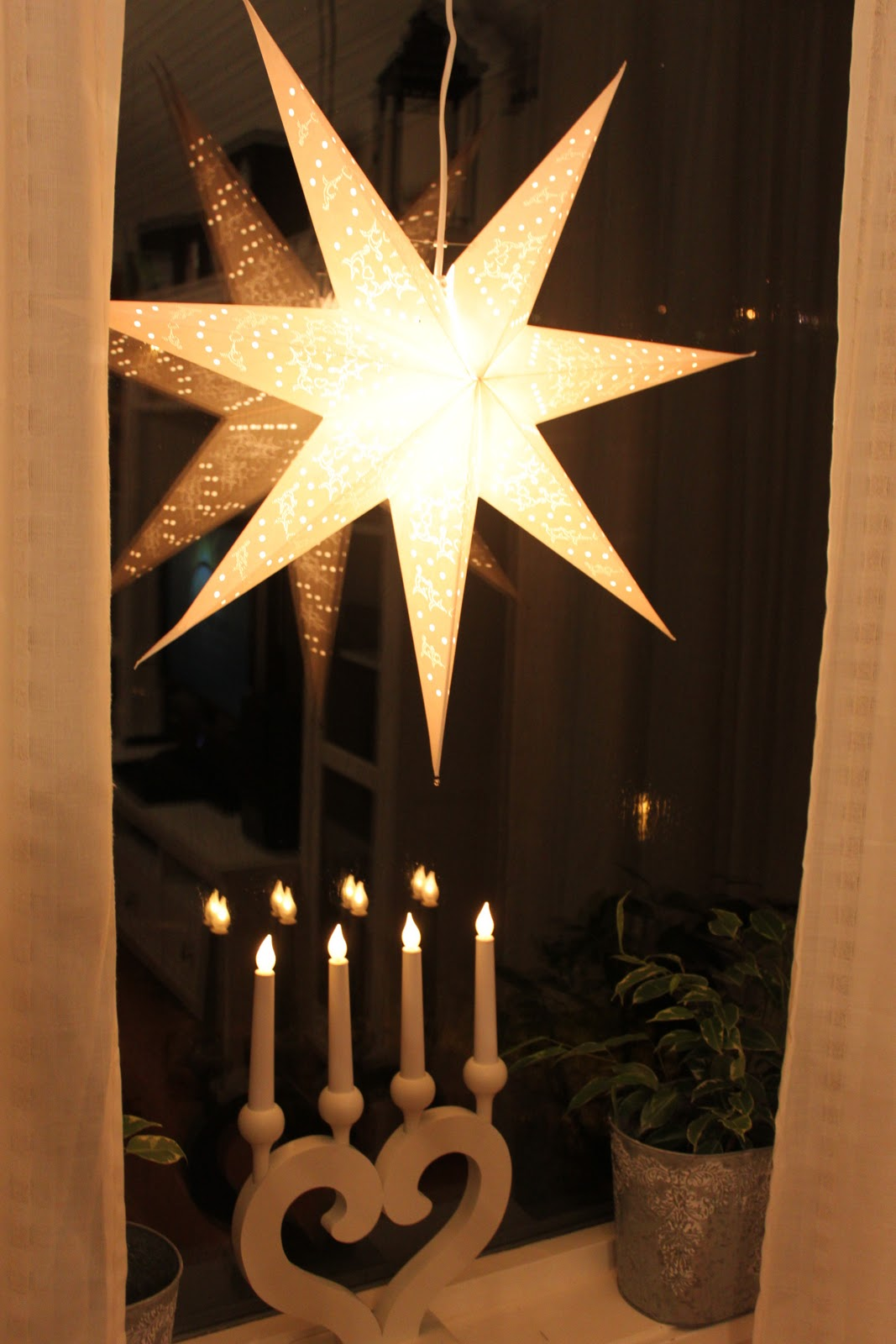 Some Norwegians put red tape over their windows to make little squares (24 to represent each day of advent), and then put something in a square each day during advent. Candy advent calendars are also common but some have gift calendars. 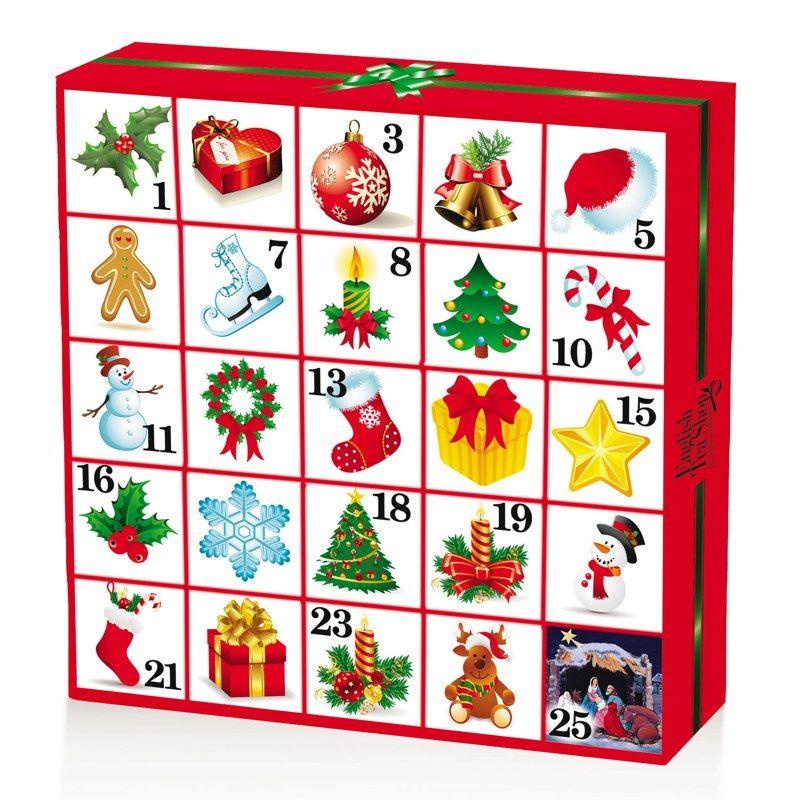 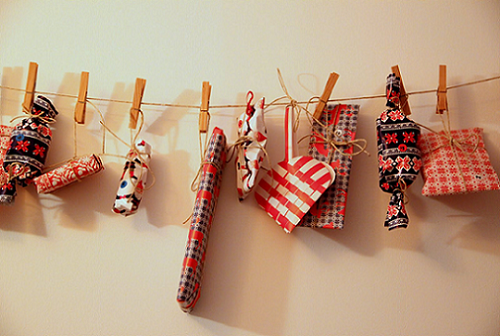 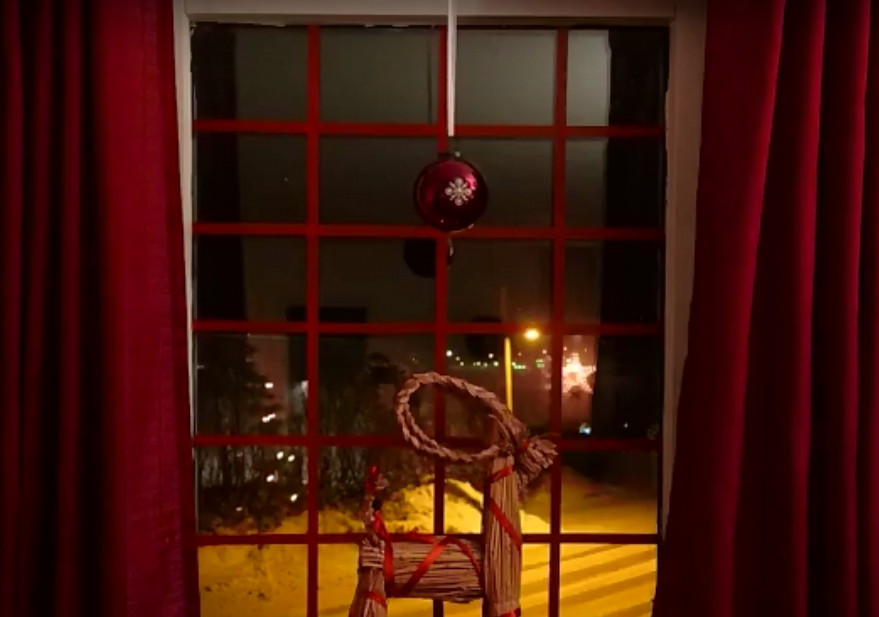 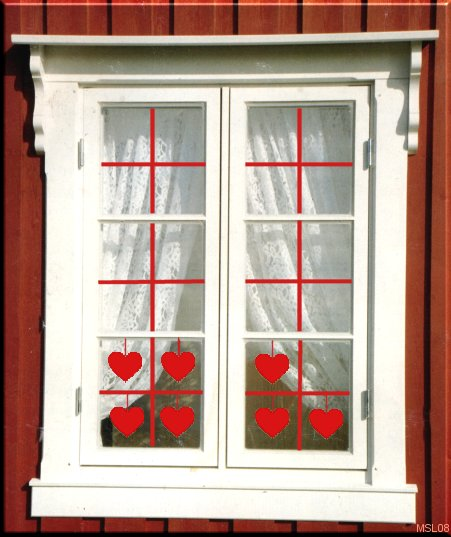 (Red tape on the windows)

The Christmas tree is usually a real tree, which often gets decorated with tinsel, baubles, garland, and lights. The tree is generally topped off with a either a silver or gold star rather than an angel. For some families, the tree isn’t decorated until the 23rd (lille julaften or little Christmas Eve).

Norwegians do a lot of baking, the closer it gets to Christmas. On lille julaften, many eat different cookies and cakes, krumkake and pepperkake being popular. These baked goods are sometimes eaten on Christmas Eve, at lunchtime. 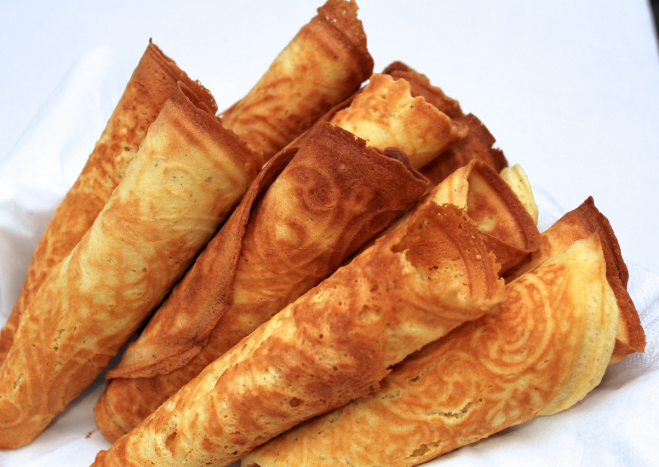 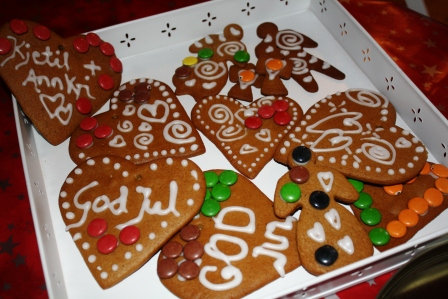 Another popular thing to eat on either lille julaften or for lunch on Christmas Eve is risengrynsgrøt which contains a whole almond and whoever finds the whole almond in their bowl gets a marzipan pig. 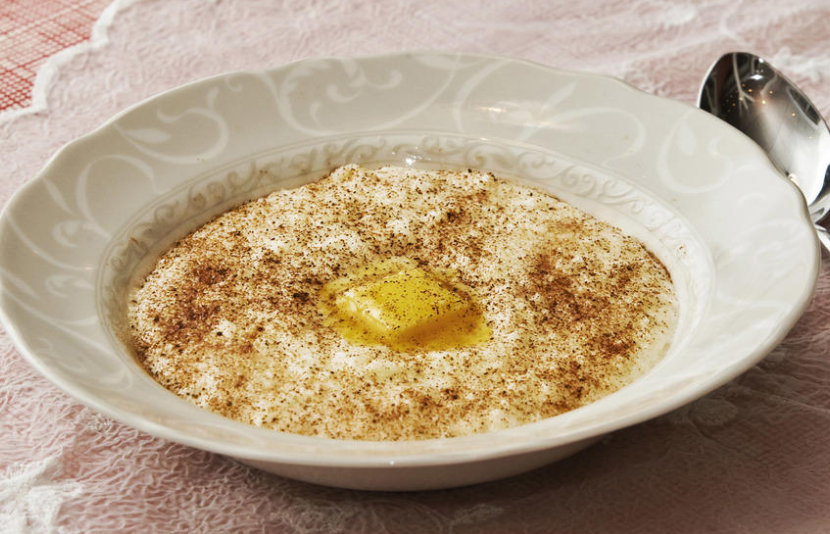 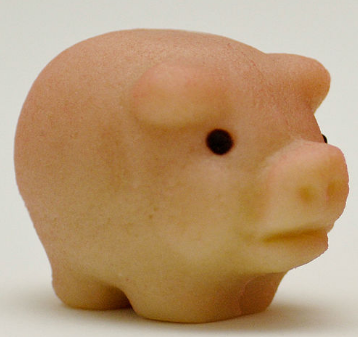 Christmas Eve, or julaften, is the main day of celebration for Norwegians. Some Norwegians attend a Christmas service on the 24th, even if they aren’t religious. Dinner is usually around 5pm on the 24th, with many Norwegians eating ribbe, served with things like brussel sprouts, gravy, lingonberry jam, boiled white potatoes, red cabbage, apples, figs, prunes, and often with medisterkaker and /or julepølse as well. Meanwhile, others may choose to have pinnekjøtt, often served with brussel sprouts, almond potatoes, carrots, red cabbage, surkål, cauliflower, etc. Dessert is often riskrem (which is leftover rice porridge with whipped cream) and red sauce, or caramel pudding. Juleøl, aquavit and gløgg are common beverages but if one doesn’t drink alcohol, one can drink julebrus, which is a sweet soda, or non-alcoholic gløgg. 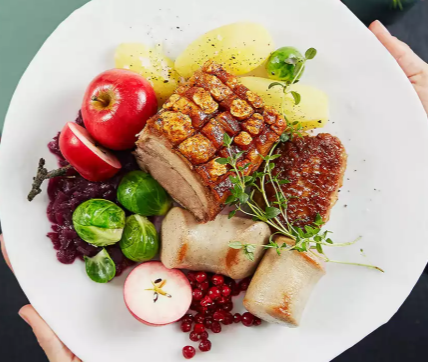 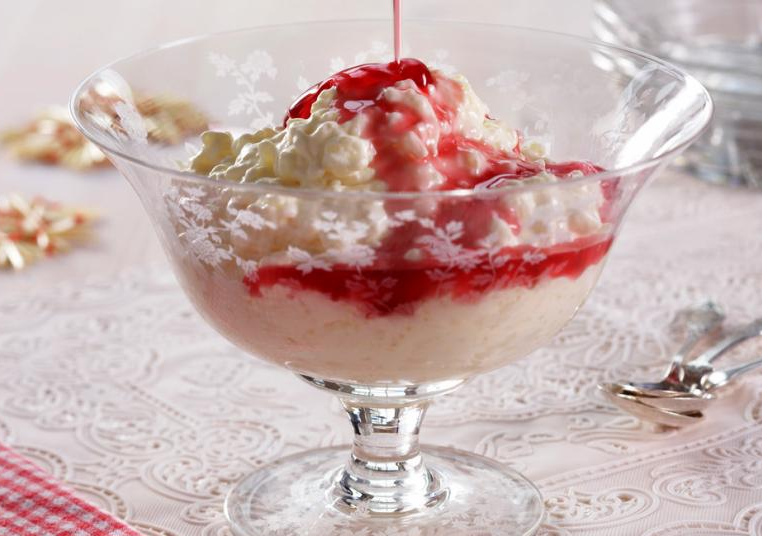 There are two types of “julenisse.” There is the “julenisse” that is essentially Santa Claus, with the red suit, black boots, white beard, and red hat, bearing gifts. This “julenisse” didn’t really become part of Norwegian traditions until end of the 1800s. Then there is a julenisse who is a barn elf (also called fjøsnisse). He lives in the barn and wears a long red hat and has a long white beard, but otherwise really bears no resemblance to “Santa Claus.” Some children still leave out porridge for this “julenisse,” on Christmas Eve, to keep him happy. 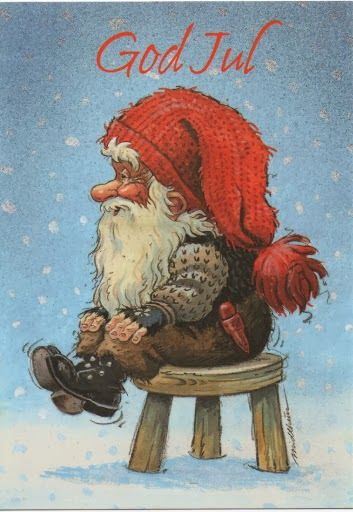 After dinner, it is common for Norwegians to sing and “dance” (more like walking) around the tree together. Once that is over, presents are then handed out, one at a time. If there are young children living in the home, sometimes an adult will dress up as Santa and deliver a few presents. Usually the opening of presents is a slow process, with only one person opening a gift at a time.

Christmas day (første juledag) is typically quiet for most. The 26th, which is andre juledag (“the second day of Christmas”), is when more formal lunches and visits with other family members take place. During the days following Christmas (romjul - 25 Dec to 30 Dec), some children dress up and knock on doors, singing songs, asking for cookies. This is called julebukk. In some locations, like Bergen, there is nyttårsbukk instead, which happens on New Year’s Eve. It’s not as common as it once was. 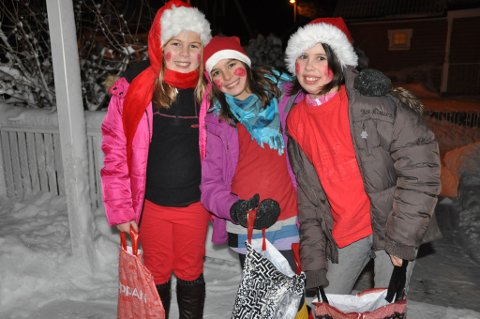 **If the lessons are beneficial, please consider buying me a virtual coffee. Thanks.**

The Tradition of Julebord in Norway

Exercise: Write a short paragraph about your family’s traditions in December; if you don’t celebrate a holiday in December, write about your favorite things during winter.